Three Knives-Cup with Snake- Basket with a “T”

The three knives are the symbol of St. Bartholomew (also known as Nathaniel) In Hebrew, Bartholomew means “Son of Talmai” and Nathaniel means, “Gift of God”.  Three flaying knives were used for skinning animals, are his most common symbol.  Nathaniel was the “Israelite without guile” (John 1:47).  Nathaniel’s faith was constant; after the crucifixion he missioned in Jerusalem and later in Asia Minor and Southern Russia where he founded numerous churches.  He is said to have been flayed alive and then crucified.  He suffered martyrdom in Russia.

The cup with snake i 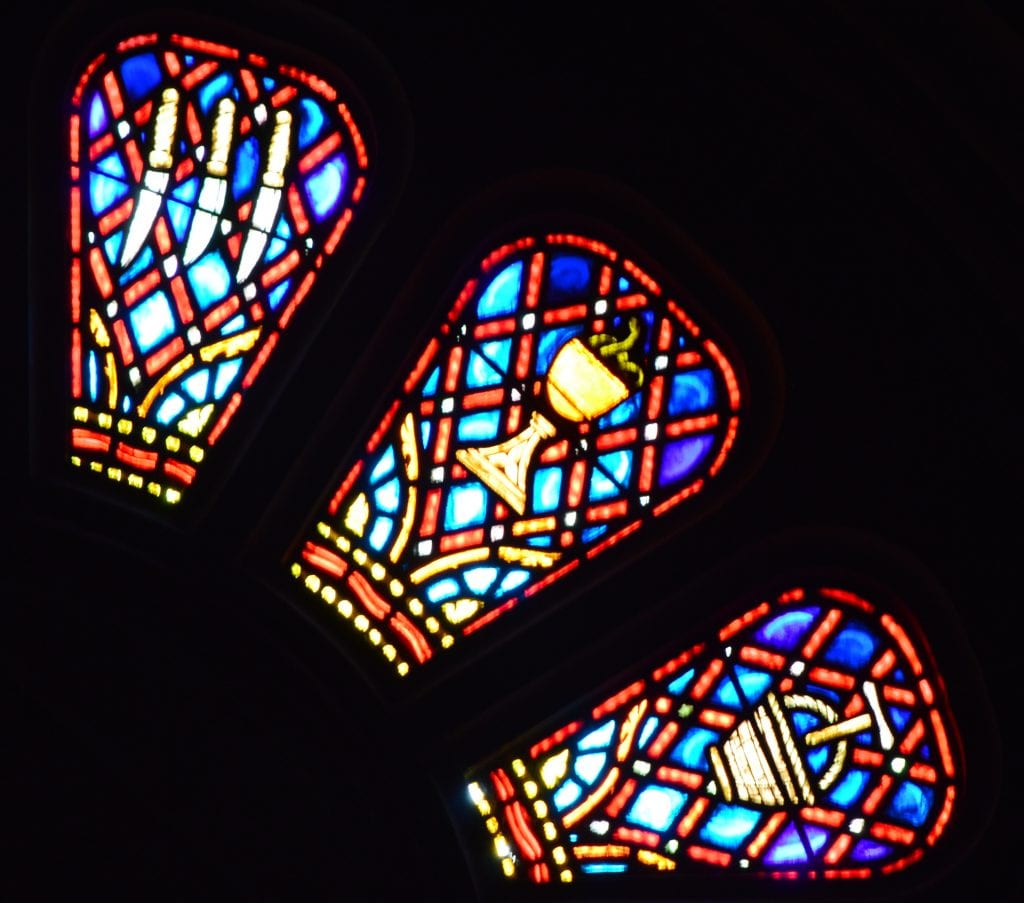 s the symbol for St. John the beloved Disciple (Hebrew; “God has mercy”) According to tradition, John drank from a cup of poison, but the poison disappeared in the form of a snake.  John and his brother James were men of zeal and ambition, desiring the highest seats beside Jesus in the Heavenly Kingdom.  They were taught humility instead.  John witnessed the trial and crucifixion of Jesus, faithfully standing at the foot of the cross. For his faith and love of Jesus, John was given, by our Lord, the care of the Blessed Virgin Mary, to receive her as his own mother.  He missioned in Samaria and Asia Minor and was a great pillar of the early church.  He wrote the Gospel of John and the Book of Revelation, and died peacefully of old age about 100 AD exiled on the Greek isle of Patmos.

The Basket with a “T”  (Tau Cross)  is the symbol for St. Philip (Greek; Lover of Horses)  usually Philip is pictured by a cross and loaves of bread which refers to the feeding of the 5,000.  He introduced his friend, Bartholomew/Nathaniel to Christ. While at various times, Philip expresses uncertainty of Jesus as the Son of god, he was a loyal friend to Jesus.  After Pentecost, Philip became a missionary in South Russia, Asia Minor, and possibly also France.   He was crucified in Hierapolis, Turkey. In 2011, his tomb was uncovered near the Turkish city of Denizli.