The sword laid on the book of the bible is the symbol for St. Paul (Latin meaning “little”) In Ephesians 6:17, Paul speaks of the Word of God as being the sword of the Spirit.  Paul was originally named Saul and was leader of the Pharisees; a Jewish sect that adhered strictly to the Laws of Moses.  He was present and approved of the martyrdom of the Christian deacon Stephen, who was martyred by having heavy stones thrown at him. While riding out to another persecution of Christians, Saul saw Christ who asked him, “Why are you persecuting Me?”  Paul was blinded (acts 9: 4-9)  Saul found Ananias, a Christian, who assisted in Saul’s baptism, and Saul was renamed, Paul. Paul became a major Christian missionary, preaching not only to the Jews, but also Gentiles (non Jews) He is the writer of numerous letters (Epistles) that eventually became part of the canon of the Books of the Holy Bible.  Paul suffered gladly both violence and ridicule for the love of Christ and the Gospel. About three years after the crucifixion of St Peter, St. Paul embraced his own martyrdom, reserved for a citizen of Rome, that of being beheaded.  His bones were found in a white marble sarcophagus hidden beneath the floor of the basilica of St Paul’s outside the walls in Rome.  In 2006 the bones were tested and confirmed the tradition that they were the Apostle Paul’s.

Three bags of money, the sym 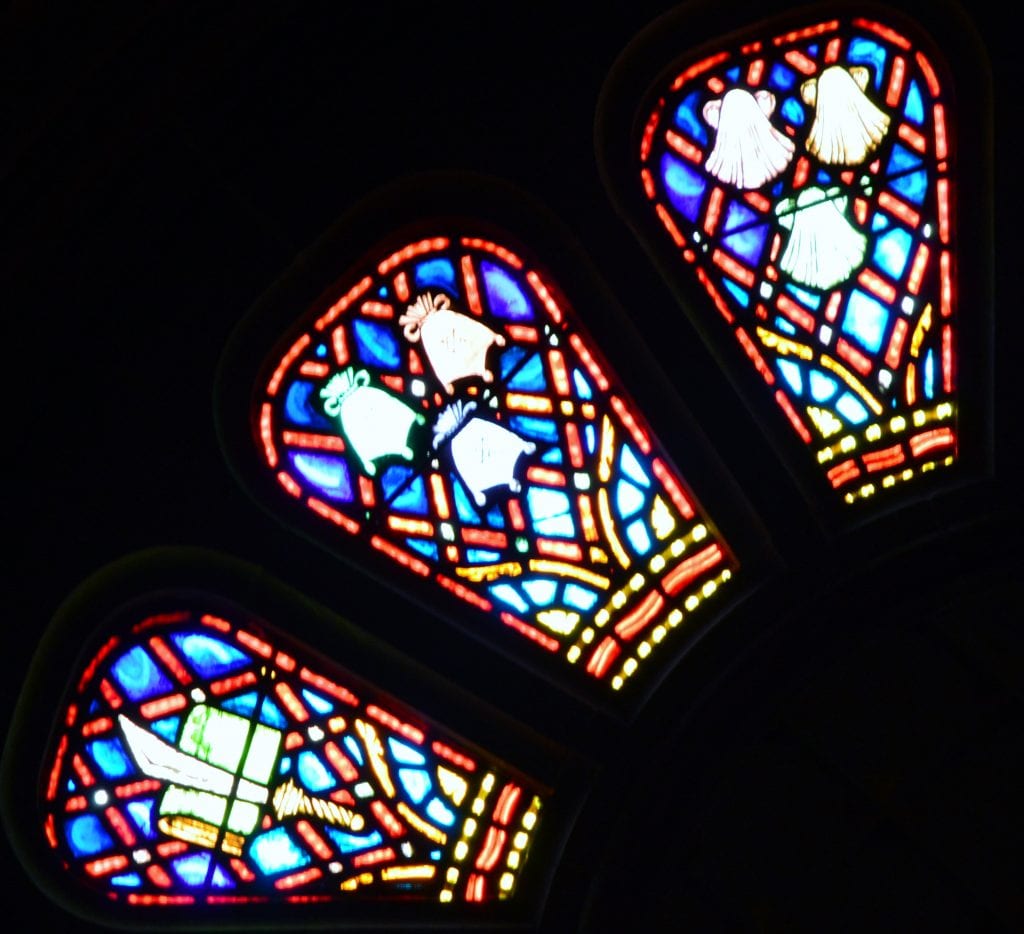 bol for St Matthew/Levi (Hebrew “The Lord’s Gift”) Three purses of money symbolize his first profession (Matthew 9:9 & 10:3) He is believed to be the brother of James the younger (Matthew 10:3 Mark 2:14); As a tax collector in Galilee he was probably ambitious, greedy and corrupt. He would have been despised by other Jews because he worked for the Romans.  He left his profession at the invitation of Jesus to “Follow Me” (Luke 5: 27-28)   Matthew preached the good news in Asia Minor, Greece, Armenia. The Gospel of Matthew is attributed to his authorship. He is believed to have been martyred in Armenia. The method of his martyrdom remains unclear, with traditions having him burned, stoned or beheaded.

Three scalloped shells are the symbols of St James the Great (James is the English version of Jacob, which means supplanter) James was the brother of St John the Evangelist.  The Scalloped shells are a symbol of pilgrimage representing James’s missionary spirit. Some traditions have him preaching in Spain until his return to Palestine and martyrdom. In 44AD he was beheaded for his faith by King Herod Agrippa I. James was the first apostle to be martyred.  His bones were moved to a tomb at Compostela, Spain and enshrined at the Basilica that was built in his honor.