Spear and carpenter’s square are symbolic of St. Thomas (Aramaic, Twin) Thomas is said to have built a church with his own hands in East India at Malipur. While there, he was shot with arrows and finally martyred by a pagan priest’s spear.  He was a simple fisherman from Galilee and followed Jesus, he would not believe that Jesus rose from the dead until he saw Jesus with his own eyes, and touched his wounds. (John 11: 14-16)   In the Early church, he was a zealous and fearless missionary, preaching in Babylon, Persia and India.  There he founded many churches, baptized countless people.

Two crossed Keys – Simon/Peter (Simon is Hebrew for “Obedient” Peter Greek for “Rock”) The two crossed keys are the symbol of St. Peter, who was given the keys to the kingdom of Heaven by Jesus.  (Matthew 16:13-19)  Peter was a Galilean fisherman, introduced to Jesus through the apostle Andrew, his brother.  Later, called from the seashore to follow Christ, Peter was impulsive and assertive.  Often he questions and misunderstands Jesus, although his loyalty is never questioned.  When the Gospels speak of Peter, it is usually first, as he was the natural leader of the apostles. 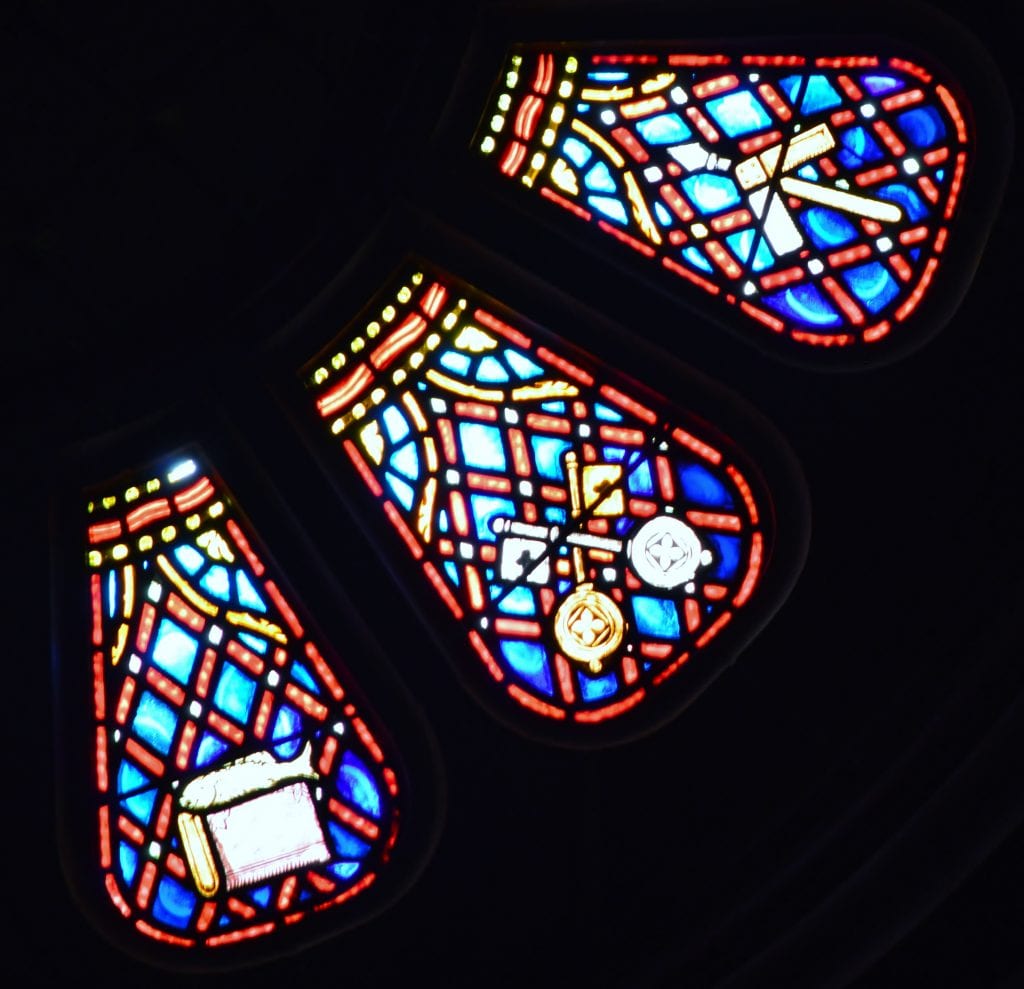 Although he publicly denied Christ three times (as Jesus predicted at the Last supper)  He was also the first to recognize Jesus as the Son of God, and so Jesus changed his name from Simon to Peter and declared “Upon this rock, I will build my Church”  at Pentecost, Peter boldly preaches the Gospel. He was imprisoned in Jerusalem by King Herod (AD 42-44) but was released by an angel. He preached the gospel throughout Palestine, Babylon, Greece and he was finally crucified by Nero Caesar in Rome.  Because he felt unworthy to be crucified as Jesus, he asked to be crucified upside down, a request that was honored.   In 1942, the tomb and bones of St Peter were found hidden in a tomb  that lies under the floor beneath St Peter’s Basilica at the Vatican.  The bones were tested and belonged to a robust man who died man in his 60’s.

Fish resting on the Bible – Simon the Zealot (Hebrew for Obedient); This symbol is given to Simon because he was a great fisher of men through the power of the gospel of Jesus Christ.  He is said to have been a companion of Jude on many of his missionary journeys.  When Jesus met Simon, he was a Zealot, a member of a group of revolutionaries carrying on guerrilla warfare against the Romans.  Simon hoped Jesus would become the next king of Israel and forcefully remove Roman rule from Israel.  He eventually became an apostle and a man of peace.  It is believed that in later years he preached the gospel in Russia, Africa Britain and was martyred in Persia.