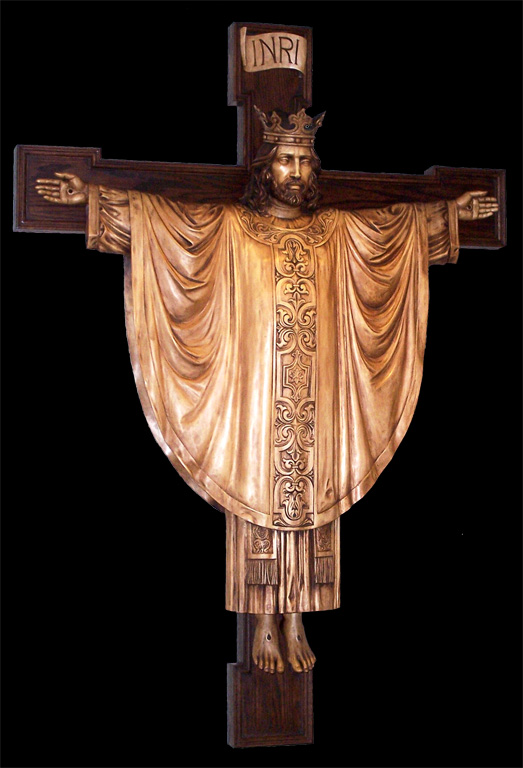 wing up, I attended Mass and received the Sacraments at Santa Maria church—the parish in my home town of Orinda, California.  It was a beautiful church, and in my mind’s eye, I can still see the great Crucifix from—I believe—Switzerland, hand carved in wood.  Its appearance was not unlike the Crucifix at Saint Paul church downtown, which was carved in alpine Germany.

Infrequently, due to some scheduling matter, my family would go to Sunday Mass at Saint Perpetua church in the neighboring town of Lafayette.  I never much liked attending Mass there.  As a small child, I didn’t like the unfamiliarity.  Besides, it wasn’t a real church: it was a gymnasium or cafeteria which had not been beautified as our wonderful Sacred Heart of Mary church has been.  But in particular, I didn’t like its Crucifix.  Not at all naturalistic, it made instead a profound theological statement which of course was way over this little boy’s head.  The statement was certainly legitimate, and my parents assured me that the Crucifix was OK . . . but I still didn’t much like it at the time.  (Now, with a more understanding, I expect I would.)

This Crucifix portrayed Jesus as the Great High Priest . . .  and King.  He was dressed in priestly vestments: a green chasuble, with alb showing from underneath.  And, if I remember correctly, He was crowned, not with thorns, but with a royal, golden crown.  This was an image of Christ the  King.

King of what—Catholics?  Christians?  All persons?  Yes, but of more: as the full name of today’s Solemnity tells us, Our Lord Jesus Christ is King of the  Universe.  So: King of the heavens (the  whole cosmos), into which He ascended; King of the seas, upon which He walked; King of the  earth, which was created in, through and for Him.  Jesus Christ is Lord of all the earth: no “Gaia”, no other concept of an earth god or goddess is a legitimate reality.  No idol or symbolic representation of the earth has spiritual substance (unless it be  demonic), and cannot be bowed down to by any Christian.  The earth—like any gift from God—is to be treated well, but  it is subject to  us, not vice-versa.  To Adam and Eve, God said, “Be fruitful and multiply, and fill the earth and  subdue it; and have dominion . . . over every living thing that moves upon the earth.”  [Genesis 1: 28]

Jesus Christ, King of the Universe, is our King.  And we get a partial, although imperfect notion of His Kingship by looking at the kingship of David.  In our first reading today, all the tribes of Israel assert that “the Lord said to [David], ‘You shall  shepherd my people Israel and shall be  commander of Israel’.”

Jesus Christ, our King,  does lead us into battle.  Another atypical image of the Crucifixion—one that I very much like—makes this point.  It is a woodcut by a Japanese artist whose name I’m afraid I cannot tell you.  Like Saint Perpetua church’s Christ as High Priest on the Cross, this Japanese crucified Christ is also clothed, but as a priest and king, but as a   samurai warrior.

Like the Crucifix at Saint Perpetua church, this image, too, speaks a theological truth: Jesus Christ, our King,  is a warrior.  The sequence we pray at Mass on Easter Sunday reminds us of this: “Death and life have contended in that combat stupendous.” Combat!   Our duty, as subjects of this King, is to follow Him into combat.

The emphasis that is so often placed on Jesus’ mercy, His forgiveness, His compassion; on the image of Jesus as a shepherd; can distort our impression of Him, making Him always “nice”, always gentle, inoffensive and pleasant.

But Jesus wasn’t always like that.  He called the Pharisees Whitewashed sepulchers, beautiful on the outside, but full of corruption within.  I do not think these Pharisees found Jesus to be pleasant.  One scribe explicitly told Jesus that they were offended by Him.  The money changers He drove out of the Temple with a whip did not find Him gentle.  Yes, Jesus kindly bound up the wounded; He healed the sick; He forgave the sinner.  But He also blasted the corrupt; exposed the hypocritical; and took a whip to those who polluted the Temple.  Let’s not wimpify Him.

When He needed to be, Jesus was a warrior.  If we are to be faithful subjects of such a King, there are times when we need to be warriors, too.  And now is certainly one of those times.  The Bride of Christ, the Church, is being attacked from without and from within.  Our King is calling us to arms in her defense, and our duty—as well as our honor and privilege—is to respond, to join the battle.

Or, battles: there are many attacks.  The attacks from without must be fought against; we may not sit on our hands.  We have a duty to battle against such attacks as direct persecutions by evil governments like totalitarian China’s and aggressively hostile California’s; to battle against the unnatural gender ideology now making great advances into our society.

But more essentially, the attacks from  within the Church must be fought against.  We have a duty to battle against such attacks as: the betrayal of Catholic doctrine; moral and financial corruption; irreverence towards the Mass and the Eucharist; idolatry; and–since every temptation is an attack on the Church and one of her members–  our own sins.

In 1972, Archbishop Fulton J. Sheen spoke about this battle to the Knights of Columbus.  He said:

“Who is going to save our Church?  Not our bishops, not our priests and religious.  It is up to you, the people.  You have the minds, the eyes, the ears to save the Church.  Your mission is to see that your priests act like priests, your bishops, like bishops, and your religious act like religious.” [quoted by Bishop Athanasius Schneider, Christus Vincit, p. 154]

Long before Archbishop Sheen, an important Christian letter from the third century was written.  In part, it reads:

“When has Christ need of your aid?  Now, when the wicked one has sworn war against His bride; or in the time to come, when He shall  reign victorious, having no need of further help?  Is it not evident to  anyone who has even the least understanding, that it is  now?  Therefore, with all good will, hasten in the time of the present necessity to do battle on the side of this good King, whose character it is to give great rewards after victory.”  [ Epistola Clementis ad Iacobum 4.  Found in Schneider’s Christus Vincit, p. 215. emphasis added.]